As promised, I’m sharing with you the recipe for the Creamy Chicken Adobo that Chef Rob Pengson taught us to make during the #CreateWithCream event last July 9, 2016.

Except for the chicken parts which were bought fresh from the market, most of the ingredients for the Creamy Chicken Adobo are already provided for by Nestle Philippines.  The blogger package / kit given to us during the #CreateWithCream event includes a bottle of Maggi Soy Sauce, Maggi Magic Sarap sachets and the no. 1 cream for adobo: Nestle All-Purpose Cream. 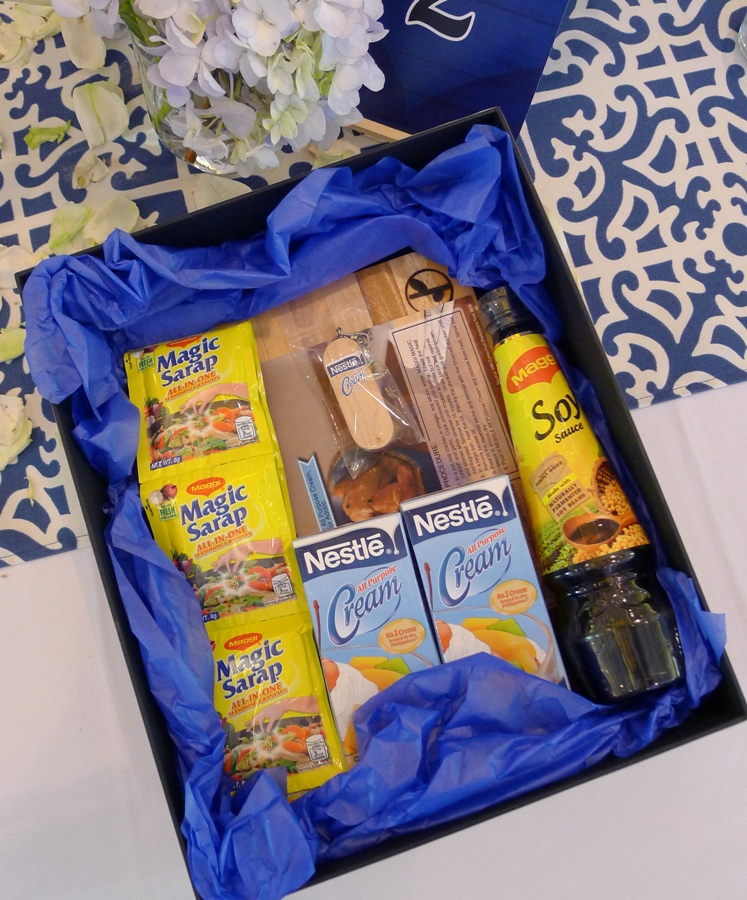 Of course, you will need vinegar, garlic, peppercorns and bay leaves to make adobo!  Our pantry is always stocked with these, hehe! 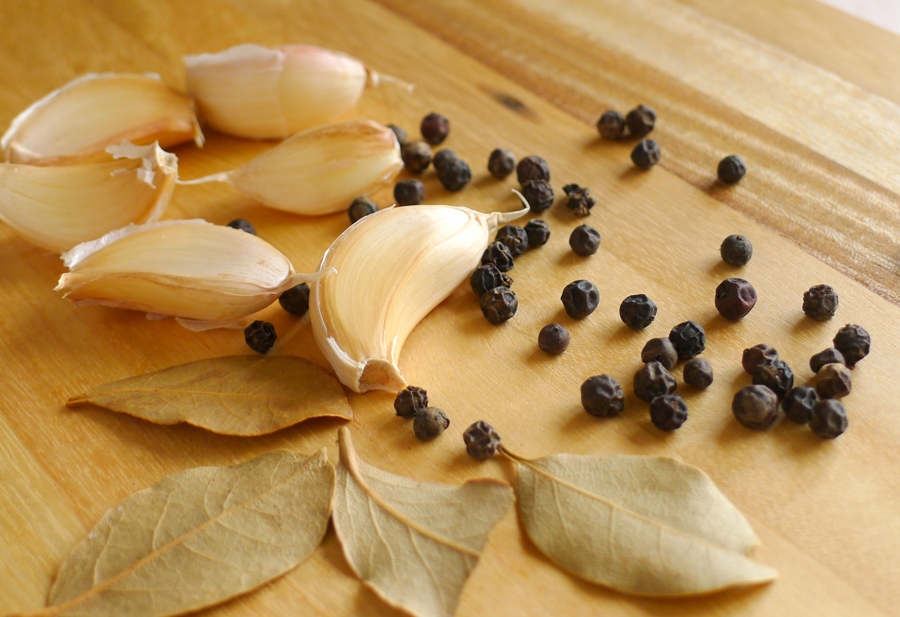 In making our version of Creamy Chicken Adobo, we mixed our own style with Chef Rob’s. Since we prefer a not-so-saucy adobo, we made a reduced creamy adobo sauce.  We also skipped the Magic Sarap seasoning because for me, adobo is really about the right vinegar and soy sauce mix.

In this case, we used 1/3 cup vinegar and 1/4 cup soy sauce (instead of equal portion of each) because I find Maggi Soy Sauce as having more umami taste (than the other soy sauce brands).  You need more vinegar to match its strong flavour. 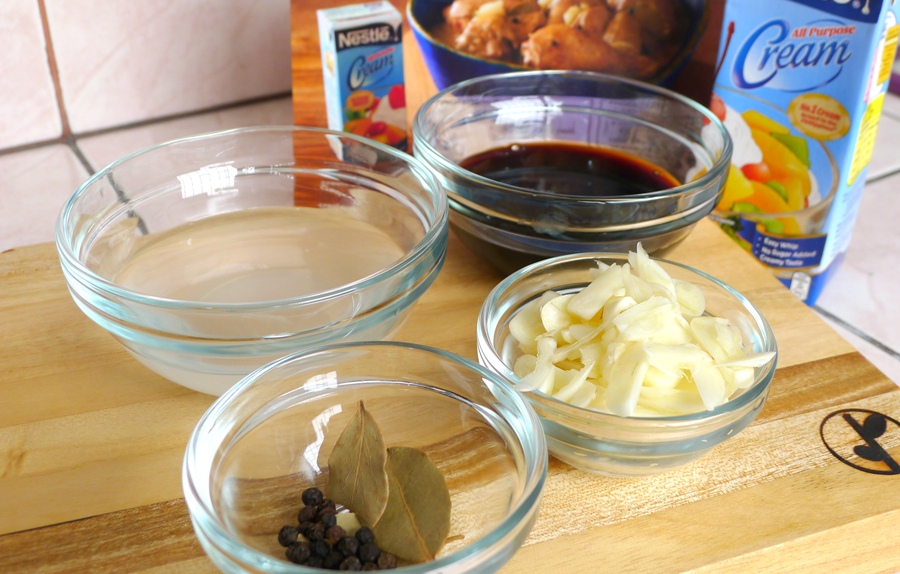 Below are the easy steps to making Creamy Chicken Adobo:

1. In a hot sauce pan, put the vinegar and let it simmer in a while (I learned this from Chef Rob Pengson, who said boiling or simmering the vinegar first will help remove the metallic taste in it). 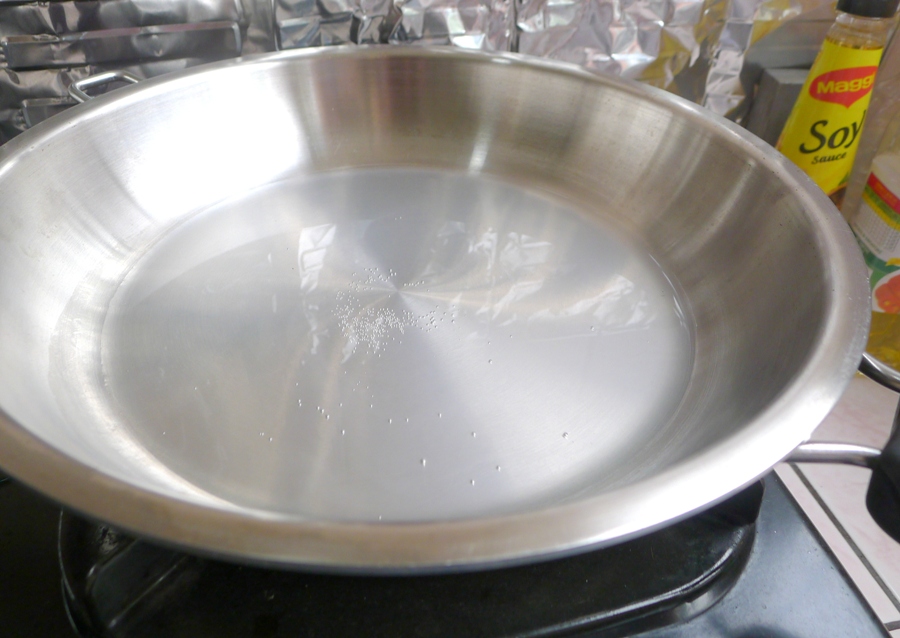 2.  Once the little bubbles were formed (Note: it doesn’t have to be boiling), add the soy sauce, garlic, peppercorns and bay leaves. We love garlic, so we used the whole bulb, sliced thinly. 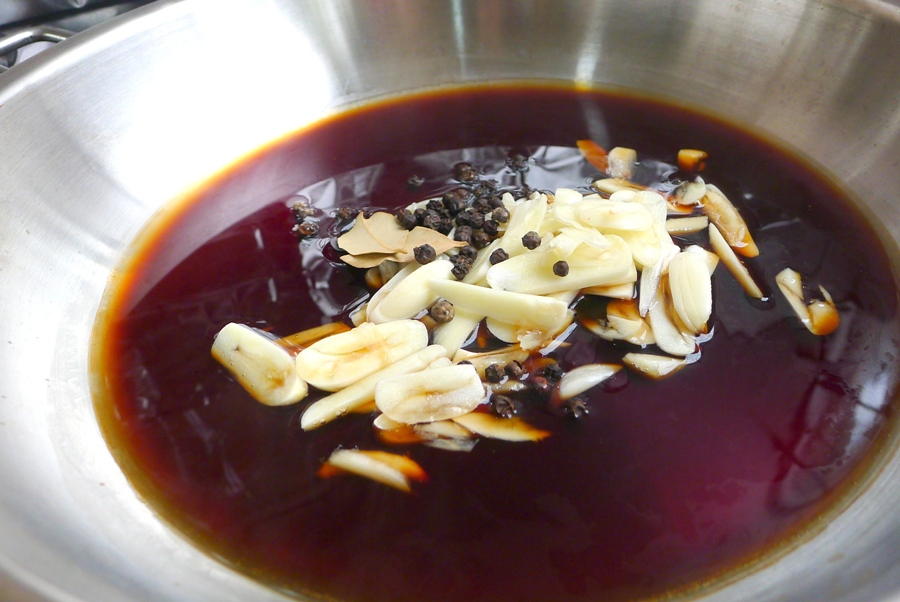 3.  Once the sauce starts simmering, add in the chicken pieces one by one.  We used plump chicken wing parts, and put just enough for the 2 of us at home. 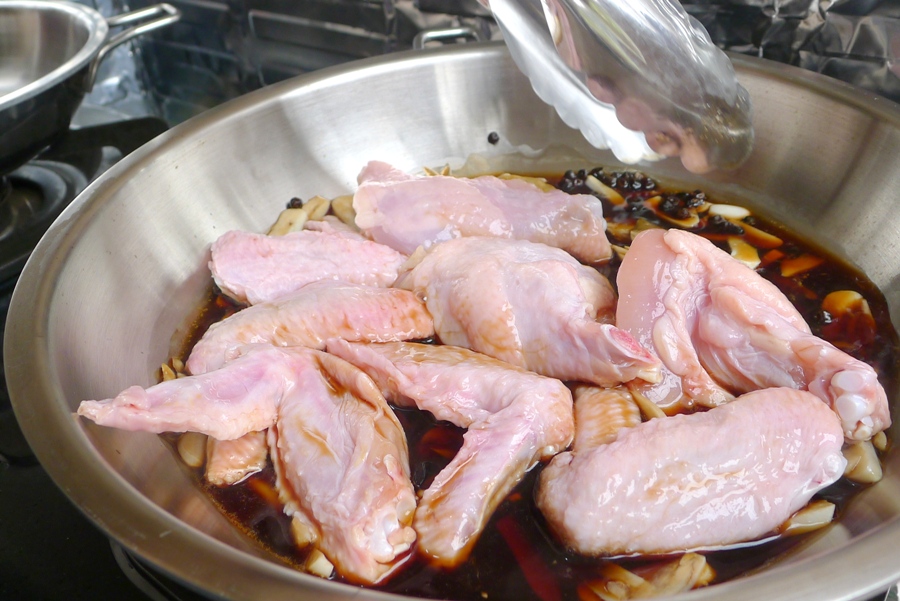 4.  Lower the heat and let it simmer (uncovered) until chicken is tender. Turn it over for the other side to cook.  I estimated about 8 minutes cooking time on each side.  The adobo sauce will be slightly reduced at this point also.  Remove from heat and prepare the chicken for pan-frying. 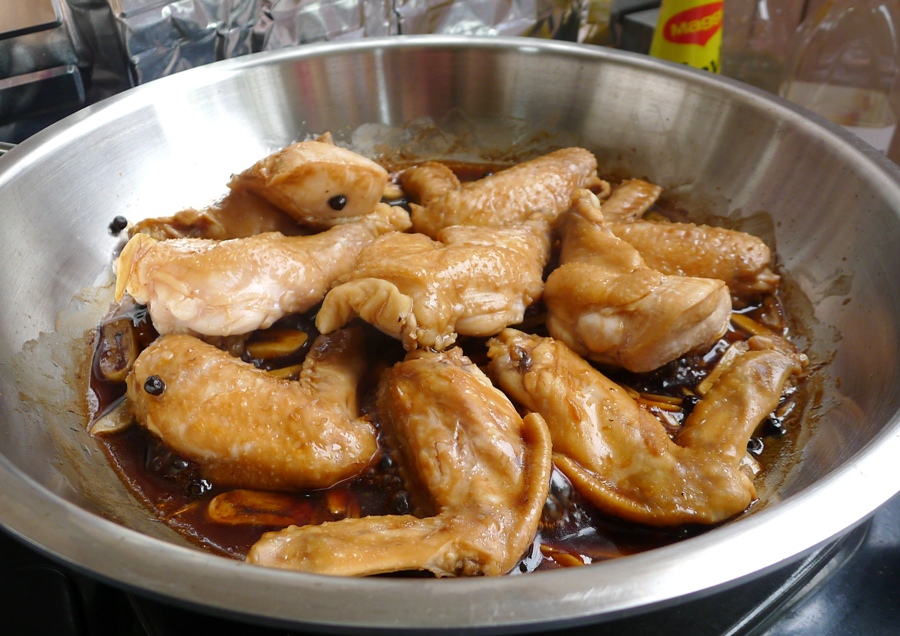 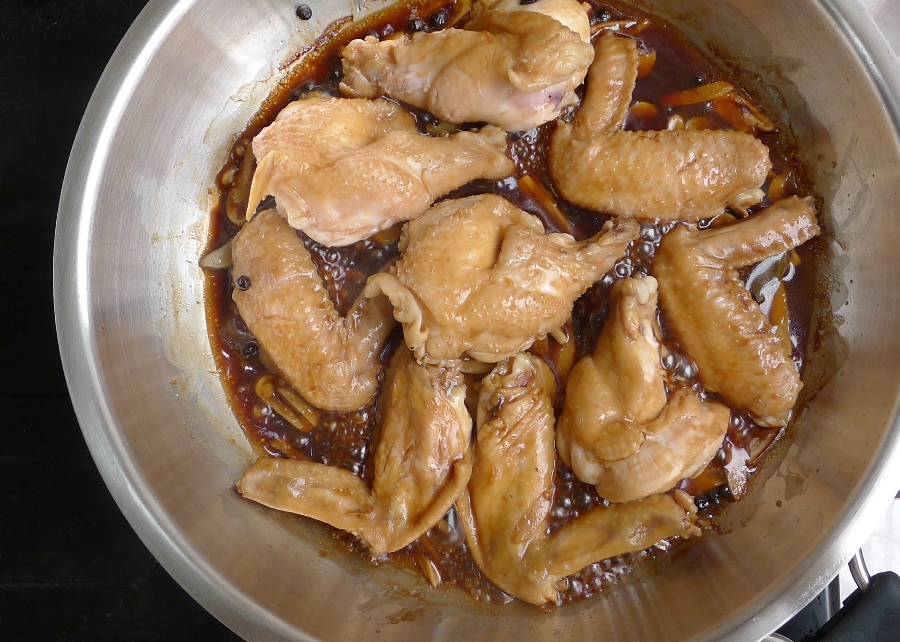 5.  Carefully transfer the chicken parts to the other sauce pan for pan-frying. Fry until golden brown. (Note: AJ took over the cooking at this point, because takot ako sa talsik ng mantika hehe!).  Remove excess oil after, then set aside. 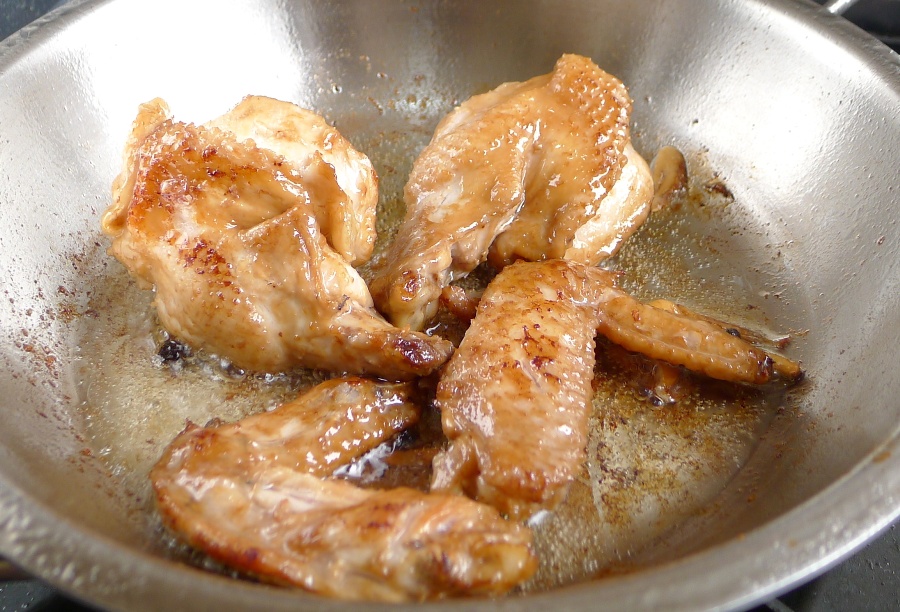 6.  Next, scoop out the garlic and peppercorn from the reduced adobo sauce and pan-fry using the remaining cooking oil. 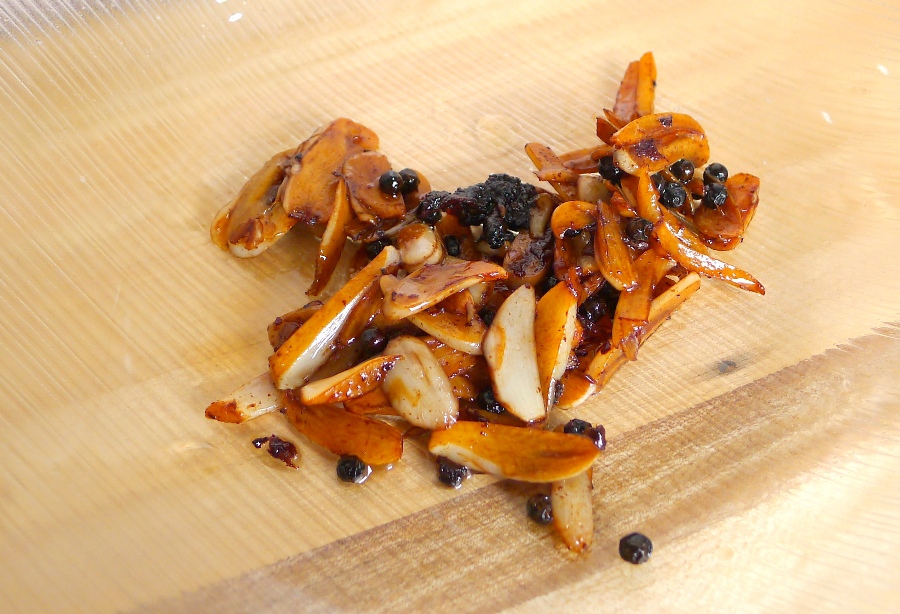 7.  Lastly, add the Nestle All-Purpose Cream to the remaining adobo sauce and remove from heat. We used up about 1/3 of the cream only (enough for the adobo sauce left).  Use a whisk to mix them well, and until the desired consistency is achieved. 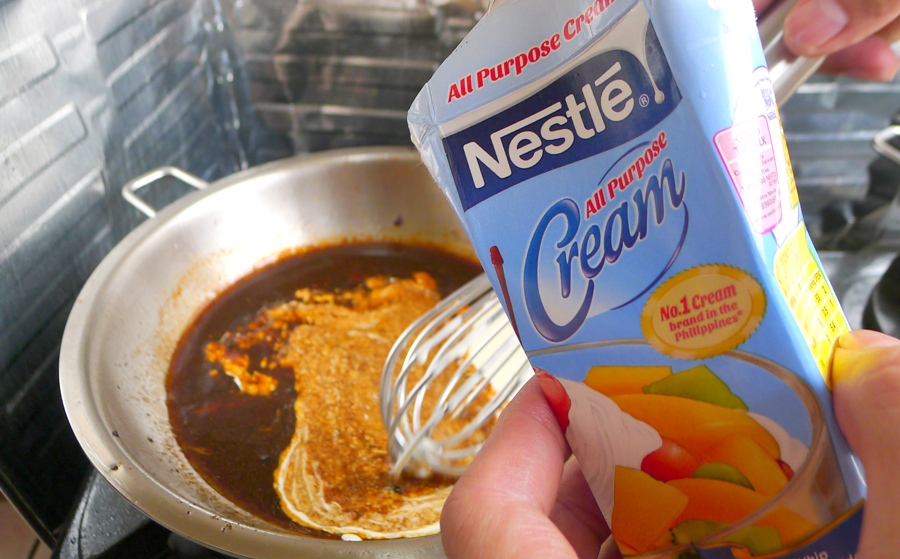 In serving the Creamy Chicken Adobo, I first arranged the pan-fried chicken in this heart-shaped bowl (that I scored at Uniwide years ago), poured over the sauce and then garnished it with lots of pan-fried garlic and peppercorns. 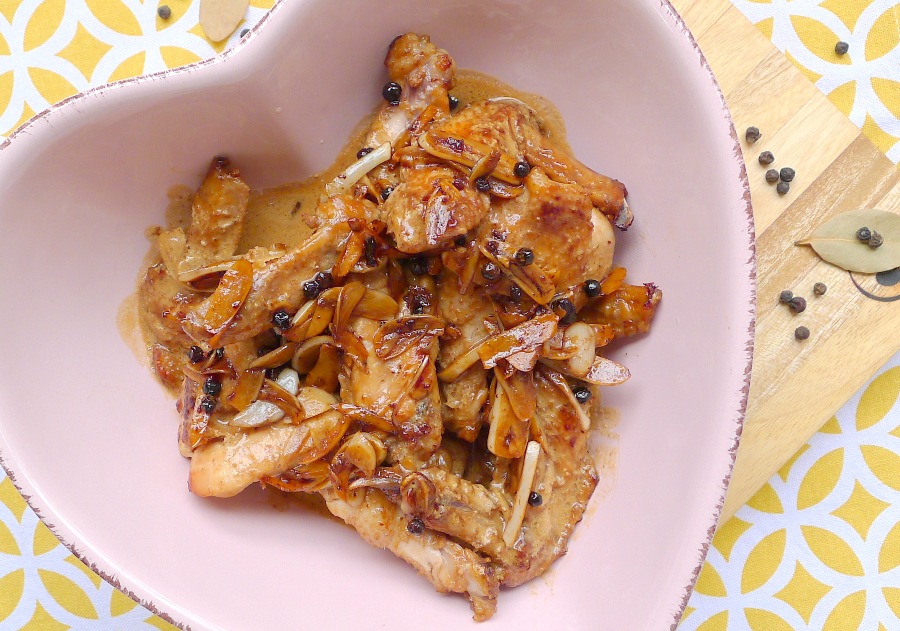 Another way of doing this recipe is to put back the fried chicken in the reserved sauce, simmer it a little, add the Nestle All-Purpose Cream (as the last step) and mix it well with the sauce and the chicken parts.

But I thought that it would make a more impressive presentation if the concentrated liquid sauce is just poured over the meat, since the creamy adobo sauce has a lighter color and would make a nice contrast to the golden brown color of the pan-fried chicken. 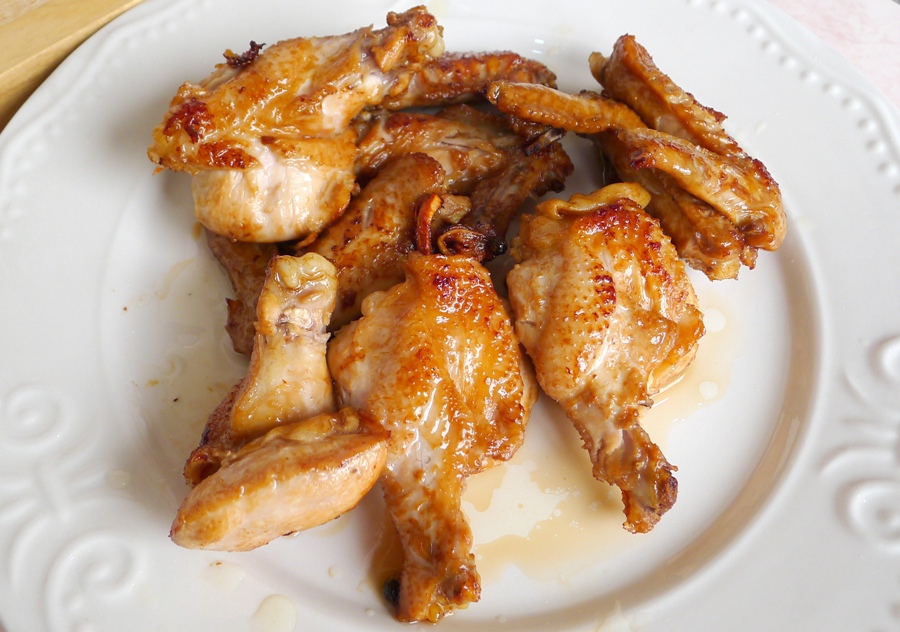 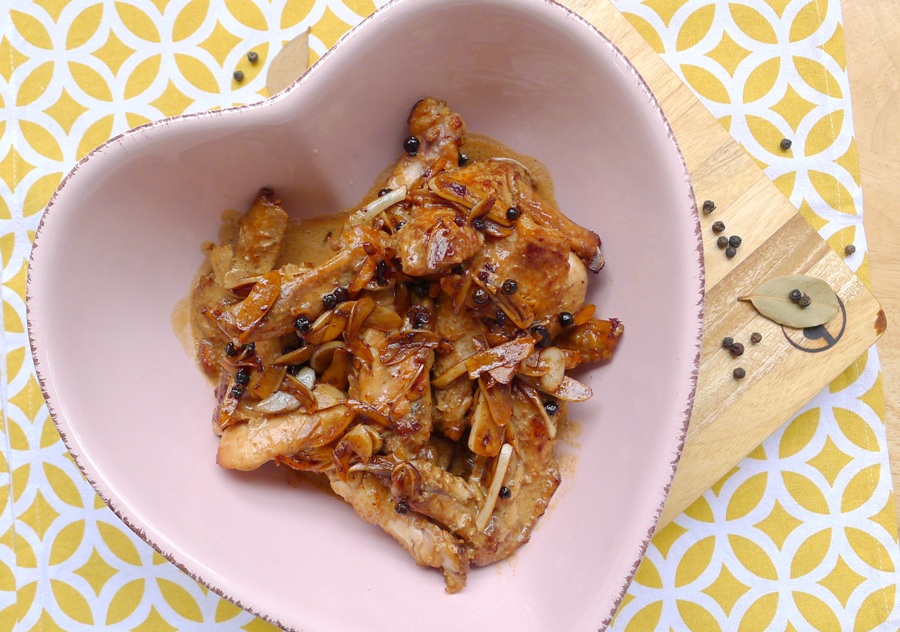 You could say that we are mighty proud of ourselves for nailing this recipe the first time!  The adobo flavour is neither intense nor lacking, and the pan-fried adobo garlic and peppercorns added punch to the already good creamy adobo sauce reduction that we made.

Give it a try soon and surprise your loved ones with an extra special adobo with a delightful creamy sauce!

Sleeping is an art 😴 Tag @_catcaaat for photos